Steve and the Hats will be playing acoustic music from 3.00 to 6.00pm under the cedar tree in the Rookery.

Bring a picnic and enjoy the music.

FREE entry but there will be a collection for the band 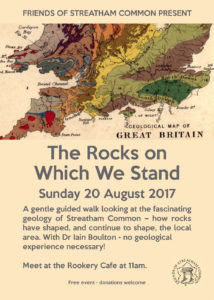 Meet at the Rookery Cafe at 11am. A gentle guided walk looking at the fascinating geology of Streatham Common – how rocks have shaped, and continue to shape, the local area. With Dr Iain Boulton – no geological experience necessary!

A FREE event, organised by or volunteers. We look forward to having you along.

A great introduction to geology if you  have ever wondered about the ground and the effects it has on our local nature. We have a brief introduction to it on our Geomorphology page 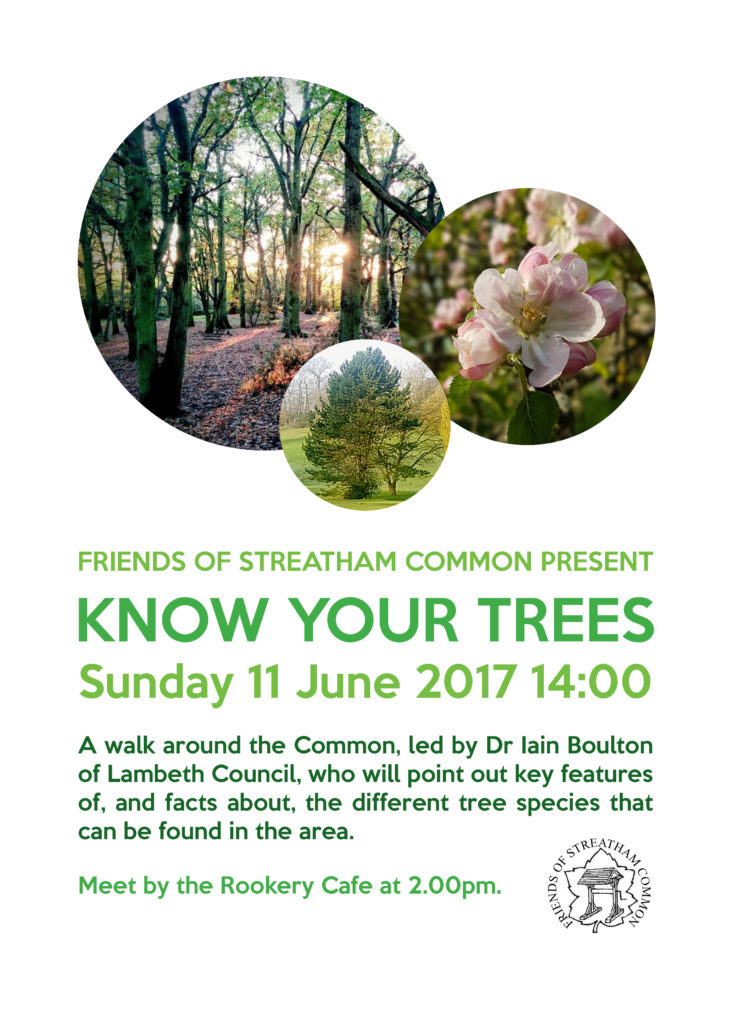 A walk around the Common, led by Dr Iain Boulton of Lambeth Council, who will point out key features of, and facts about, the different tree species that can be found in the area.

You can see this event as not only a fun educational walk, but one that will be good for your health! Research shows that within minutes of being surrounded by trees and green space, your blood pressure will drop, your heart rate will slow and your stress levels will come down.

Free – but you can always make a donation if you enjoyed it!

For those that dont have access to a garden or balcony, or work long hours, or have young children – Streatham Common provides the perfect place for escape. Whether its hanging out in the playground or walking through the woods, laying in the long grass or kicking around a football – we all agree its a wonderful place to spend a sunny day.

The common hasn’t escaped the swinging cuts of the last few years and has lost around 70% of its funding. The FoSC volunteers & Sccoop work hard to make the most of what we have in way of volunteering and fundraising. They also spend a lot of time trying to negotiate with the Council to have things fixed, or even to have a rubbish collection. Everything is fought for.

But one thing we cannot control is litter. That is down to everyone of us who use the Common.

If taking a picnic, chilling out or using the Common for exercise – we ask that you leave no trace. The cuts mean that we only have a limited bin collection. The Common on busy days & weekends is unable to cope with the amount of litter left. The downside of this very much affects the environment in a number of ways.

Love your Common. Take ALL your rubbish home with you. Recycle. And know you have invested, in a small way in protecting your Common and keeping it safe for your Community. 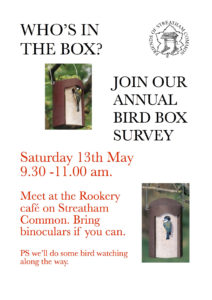 The Friends need you!

Green space everywhere is under attack. From development, from budget restrictions, from environmental impacts, from vandalism, from privatisation. We need our green spaces, for play, for peace, for health and for future generations to enjoy. The Common belongs to us all.

All sorts of skills are needed to keep on top of the work that the volunteers of the FoSc provide. Our Kite day is run entirely by volunteers and attracts people from all over the country, and some even travel from abroad to attend, such is the professionalism of the event and those who play apart in it. Bird walks and nature trails are great fun & educational for the volunteers and attendees alike. It brings you closer to the common. But have you got something you know about? Do you see something missing that could enhance and sustain the Common through into another century? A transferable skill…a particular knowledge…..something that you think the community might enjoy?

Come and talk to us.

We need to think outside the box on how we raise funds, on how we preserve, on how we educate others on how special this place is. New ideas are welcome. Especially from young people. You are the future of this common and it needs safe hands to pass it into. You are not expected to give up a lot of time, just now and again when we need a spare pair of hands or a voice where we need to be heard. But if you want to give more – we would love that!

Be part of Streatham’s future.