If visiting our beautiful Common to have a picnic or take a walk – it is really important more than ever that you take home any litter with you, for 2 reasons. The Common does not have recycling facilities and the bins will never deter wildlife from pulling out your old picnic items. To keep EVERYONE safe, members of the public and park workers alike – please take everything home with you. You can spread the virus without presenting symptoms. Please do not put others at risk.

To prevent a second wave of Covid, we must work together to ensure our contact points are lessened. Please be aware the benches are not sanitised. If you do use the benches be aware and ensure you remember to wash your hands thoroughly when you get home.

At this time, please keep 2 metres apart from others whilst on the common.

It is great to see that most joggers have chosen to run on the grass and are leaving the pathways for walkers, those less mobile, those using wheelchairs and parents with children. We very much appreciate the efforts of our community to make change to their routine. Early mornings and late evenings are great times to engage in exercise, you have more room to move about, and enjoy the quietness of the common.

Dog owners – please respect other dog walkers right to asking you to call your dog away if they get too close. This can reduce the opportunity for any complications with social distancing. Please be extra vigilant on picking up your dogs mess, since it is important that more people may need to sit on the grass rather than the benches.

And remember – this is all temporary. The sooner we can get this virus under control – the sooner our lives can get back to normal. All of us have a role to play in supporting each other and our community

Join in the carol singing by the crib at the foot of the Common from 7.00pm.
There will be mulled wine and mince pies. Singing starts at 7.30pm.
EVERYONE WELCOME

Its that time of year again where we get to say thank you to members for their support so The Friends Christmas party at The Bull pub with some lovely food & wine will follow the singing.

The party is for members only, including those who join on the night.

NOT A MEMBER? No fear! Join now and give yourself an early Christmas present – or better still, give someone the gift of a FoSC membership!
Individuals – £6 / Families & Organisations – £12
Concessions – £2.40 / Concession Families – £4.80

In the early Eighties, a young psychologist did something unusual. His name was Roger Ulrich, and he started reviewing the hospital records of patients recovering from surgery to compare the recovery rates for people with bedside windows looking out on to trees with those of patients who could only see brick walls from their beds.

What did he find? On average, the ones who could look at natural landscapes healed faster, needed significantly less pain medication and had fewer complications post-surgery. 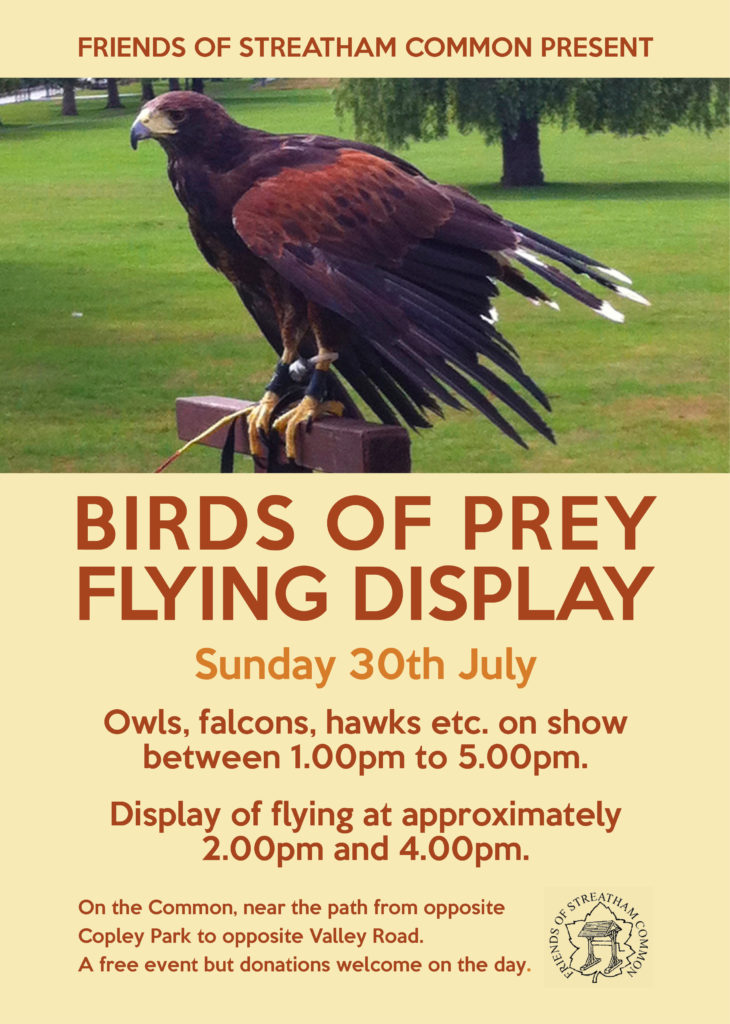 A variety of hawks, falcons, owls and other birds of prey will be on display throughout the afternoon, during which there will be two flying displays.

On the Common, near the path from opposite Copley Park to opposite Valley Road. Birds (owls, falcons, hawks etc) on show from 1.00pm to 5.00pm, and displays of flying at approximately 2.00pm and 4.00pm.

A free event but donations welcome on the day.