Streatham Common is to benefit from a new Heritage Lottery funded project run by the London Wildlife Trust.

The Great North Wood project, which is to receive £699,000 over the next four years, aims to revive and reimagine a wood that once covered a large swathe of land lying south-west of London, of which only fragments remain. Both educational activities and woodland management will be carried out. Precisely what will be funded in Streatham Common’s woodlands has yet to be established.

The full article can be found here: Bringing an ancient landscape back to life

Good to see two new benches replacing a missing and damaged pair, new tarmac on a footpath and in the car park, and new manhole covers to replace broken ones. All paid for by income from events on the Common last year.

Ten days after a small group of travellers parked their vehicles on the Common but were persuaded to leave on the same day, another small group has arrived. The police were in attendance within an hour. later the council removed three caravans but they were moved back by the travellers in the evening. Next morning, however, the travellers departed.

Four new boards containing historical and botanical information are in place in the Rookery. The content for the boards was developed by the Rookery Design Group as part of the Centenary Project (funded by Heritage Lottery Fund). The design was created by south London designer Michiko Nitta – www.michikonitta.co.uk. 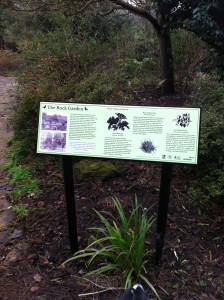 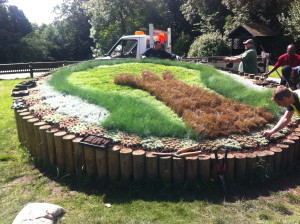 The raised floral bed in the Rookery was replanted yesterday, based on Sunnyhill Primary School Eco-warriors’ winning entry in the Rookery Centenary Flowerbed Design.

A surprise discovery on the Nature Trail Walk on Tuesday the 8th was a flowering orchid, the first that anyone can recall on Streatham Common. It was identified as a Broad-leaved Helleborine. 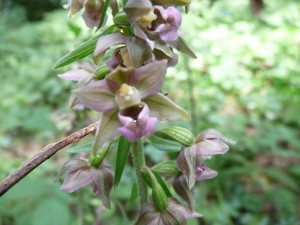 A brand new sundial is in place in the Rookery Gardens, although you won’t be able to examine it up close until the Heritage Lottery funded work on relaying the surrounding crazy paving has been completed. The new sundial is 100% brass. This makes it much less liable to suffer from vandalism than the previous slate sundial but much more likely to be stolen, which was the fate of the previous brass sundial! Next time steel, perhaps?

During February and March, over 700 new trees and shrubs were planted on the Common, mostly adjacent to Streatham Common North. You may not have noticed them because they are just whips – very young trees that are less than a metre tall – but in years to come they should grow into fine copses of native species, although the eventual density and height of the trees have yet to be decided.

The trees have come to the Common as part of a demonstration project of what is called biodiversity offsetting, a relatively new and rather controversial scheme (* see below for some background). In this case, the trees are being planted largely to offset (make up for) the loss of about two acres of disused railway sidings at Thameslink’s Selhurst depot. The land has been colonised by scrub, grass and silver birch trees for some years but has now become part of a new train storage facility. The new trees on the Common have been planted by the London Wildlife Trust (LWT) and its volunteers and LWT will be looking after the trees for the next three years. The scheme is funded by Network Rail, which is responsible for most of the UK’s rail infrastructure. Brockwell Park will also be a future beneficiary. Planting had the approval of both Lambeth Council and the Friends.

All of the new trees are native species relevant to the locality. They include hawthorn, field maple, guelder-rose, hazel, rowan and silver birch, which have been planted in mixed clusters of at least 100 whips. Between them, these species will provide wildlife habitat, shelter and food sources that are otherwise rather scare on the Common, which is currently dominated by oak trees.

The project launch was attended by Environment Secretary Owen Patterson, whose department announced proposals for biodiversity offsetting in 2011 and instigated some pilot studies to test them*. He spoke briefly on how biodiversity offsetting could provide a net gain for both nature and business and then proceeded to plant a tree whip or two near the car park. Proper planting started in early February opposite the junction of Leigham Court Road and Streatham Common North and subsequently continued down the latter, with substantial plantings on either side of the paddling pool, opposite the junction with Valley Road and opposite the memorial garden. Planting for the spring finished on March 7th with a cluster of trees opposite the builder’s yard on Streatham Common South.

In addition some bramble clearance has been carried out with a view to further planting next autumn, when some work in the woodlands is also being planned. The Friends hope to round up some volunteers to assist with some of the autumn work.

The new planting has generated a certain amount of local friction. Part of this was because the initial planting was not altogether according to plan although this has now been remedied. Some of the press releases from the various partners involved also created difficulties. Statements in one that 10,000 trees would be planted – a gross exaggeration – and that a part of the ancient Great North Wood would be created – which was pure ‘spin’ – led to unnecessary concerns that the whole of the lower Common would be turned into woodland.

The biodiversity offsetting scheme, recently formulated by DEFRA (the government’s Department for Environment Food and Rural Affairs) is intended to be “a measurable way to ensure we make good the residual damage to nature caused by development which cannot be avoided or mitigated” and a way to overcome what it calls the “expensive and inefficient planning processes that delay or block the housing and infrastructure our economy needs to grow”. However it has been criticised by some as being based on simplistic measures and false premises.

In order to calculate how to offset the damage to the environment caused when a green space is turned into a building site, DEFRA has come up with a metric that is intended to measure the value of what is lost and therefore what needs to do done to offset it. Six pilot projects to test the scheme were started two years ago and the results are due in June. The project on Streatham Common is part of an additional pilot, which will test, among other things, how possible it is to find sufficient sites for offsetting within a city.

Critics of the biodiversity offsetting scheme claim that the metric used is both superficial and simplistic. A major criticism is that it takes no account of the deep ecological and cultural value of what it being lost. For example, can one really offset the destruction of a much-loved and ancient woodland by planting twice as many trees on a virgin site? DEFRA even goes so far as to claim that some of the offsetting aims to be not just an equal replacement for what is lost but a net gain. Indeed Owen Patterson claimed this for the planting on Streatham Common. In our case, at least the land that it being lost is not in the category of ancient woodland. Nevertheless, it is a loss of an area of some ecological value. The question is whether the planting of hundreds of trees on the existing green space of Streatham Common more than makes up – or even makes up – for the loss of green space elsewhere.

A further point made by critics is the lack of guarantee of the sustained future of any results of offsetting. In our case this equates to whether Lambeth Council (or more likely the cooperative that is planning to take over the running of Streatham Common) will have the ability to nurture so many young trees once LWT hands them over in three years time. Finally there is a general concern that DEFRA’s biodiversity offsetting may be introduced as a voluntary scheme rather than being mandatory.

These points and many others have been made in submissions during the period of public consultation on the proposals last year. DEFRA’s response is due sometime in the summer.

It is to their credit that Network Rail / Thameslink have voluntarily participated and it was because of their desire that the offsetting was carried out relatively close to the area of loss and in the vicinity of Thameslink stations that Streatham Common has become a beneficiary of this particular scheme. LWT are aware of the sensitivities over the scheme and will be working with the Friends and other stakeholders on the Common to ensure that the offsetting provides both ecological and social benefits to the site as well as a better understanding of how offsetting might be effectively implemented within an urban context.