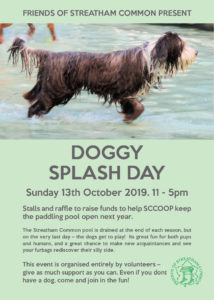 The day all dogs wait for in their furry calendar. So lovely to watch dogs go wild in the surf…well at least the pool anyway! All gets very excitable. Humans allowed in also if you are well behaved.

From 11.00am until 5.00pm in the paddling pool. A chance for all dogs to splash around in the pool before it closes down for the year. Non dog owners welcome to come and watch the fun.

The event is run entirely by volunteers so even if you are not a member and just a dog lover – we welcome any help you can give us on the day to steward the event. Please contact us at

Registration opens 12pm and costs £1.50. Starts at 1pm.
All proceeds go to Friends of Streatham Common and Pets as Therapy.

John Rhodes has run the dog show for 20 years now. He has worked tirelessly for both Pets as therapy and the FoSC. Lets give him some payback this year. We need volunteers. So any dog lovers out there. please 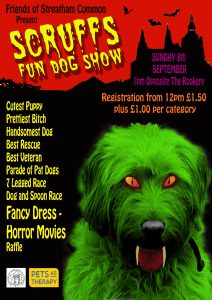 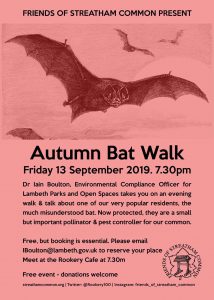 A perfect night out for a spooky Friday 13th and if  you are a fan of ‘What we do in the shadows’ series. Join Dr Iain Boulton for an evening walk & talk about one of our very popular residents, the much misunderstood bat. Now protected, they are a small but important pollinator & pest controller for our common.

For more information on the British Bat population – please go to http://www.bats.org.uk 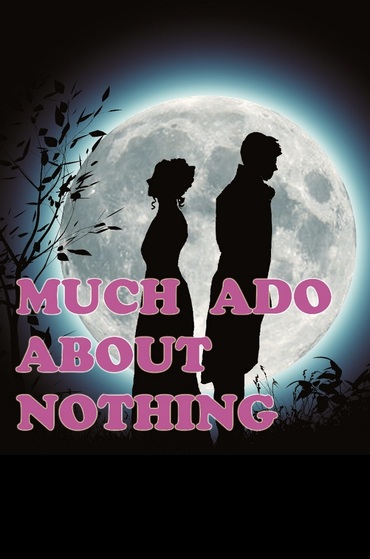 Festival Player’s will perform Much Ado About Nothing with an all male cast on the Rookery lawn.

“The course of true love never did run smooth”, but the sparring antics of Shakespeare’s erstwhile lovers, Beatrice and Benedick, provide great hilarity for the other members of the household who plot to reunite them. Against this background, another romance is almost derailed by the machinations of a jealous Duke until the local constabulary bumble upon his plans.

This delicious comedy, popular for over 400 years, will be performed for you by The Festival Players acclaimed all-male Company, in a crystal clear, energetic, colourful production, enhanced by original songs composed by Johnny Coppin.
Don’t miss this Summer treat; fun for all the family.

Open air performance, bring your own rugs and chairs and picnics.

As with every visit to Streatham Common – we ask you to take home your litter. Please leave zero trace.

The park has no recycling facilities, please recycle at home. 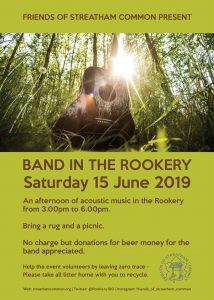 After the Rookery market, enjoy an afternoon of acoustic music in the Rookery from 3.00pm to 6.00pm.

Bring a rug and a picnic.

No charge but donations for beer money for the band appreciated.

As with every visit to Streatham Common – we ask you to take home your litter. This event is organised by volunteers and we can thank their year round hard work by leaving zero trace.

The park has no recycling facilities, please recycle at home. 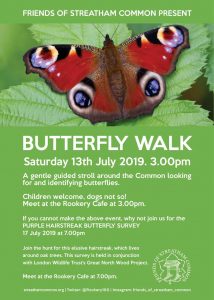 A gentle guided stroll around the Common looking for and identifying butterflies.

Children welcome, dogs not so!
Meet at the Rookery Cafe at 3.00pm.

Please think of joining or donating to the Friends of Streatham Common so we can ensure our common is sustainable and educational for years to come. 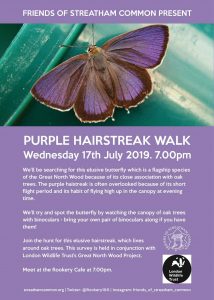 Meet by the Rookery Cafe at 7.00pm to join the hunt for this elusive butterfly, which lives around oak trees.

This handsome butterfly is widely distributed throughout southern areas wherever there are oak trees; even a solitary tree may support a colony. It is frequently overlooked as adults remain largely in the canopy where the main adult food source is honeydew; they fly more commonly in the evening of a warm summer’s day. They are only driven down to seek fluid and nectar during prolonged drought, as occurred in 1995-6.

There has been a recent increase in records and an extension of the range of this butterfly especially in the English Midlands and south-west Scotland, even in urban areas (including London) which may be related to improvements in atmospheric quality. White-letter Hairstreak is similar but has W-shaped streak.
Size and Family

Habitat : Difficult to spot as it flies around the tops of Oak trees in woods, hedgerows and parks, including in urban areas. 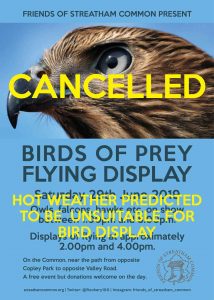 THE TEMPERATURES FOR THIS EVENT ARE PREDICTED TO BE TOO HOT FOR OUR BEAUTIFUL BIRDS TO SIT OUT ALL DAY OR FLY. THEIR WELFARE COMES FIRST.
To celebrate these wonderful birds in the meantime, read all about them on the RSPB website

Our yearly display showing the majesty of the Kings & Queens of the Skies. Great fun for kids and adults.

Displays of flying at approximately 2.00pm and 4.00pm.

On the Common, near the path from opposite
Copley Park to opposite Valley Road SW16

A FREE event but donations very welcome on the day.

A wonderful opportunity to hear local Historian John Brown talk about Bygone Streatham as well as to meet fellow members and hear about all the work being done by the members to support the Friends aims for the Common. If you haven’t been before – please come along – the more the merrier. A chance to sit back and listen or, if you want, to become more involved. We always welcome those with ideas and the drive to make the Common better still for users and the wider community.
Agenda:
● Introduction
● The past year on our common
● Elections of officers and reportsTalk :TBC
● Talk by local historian John Brown on Bygone Streatham*Presentation by Maurice Nelson on Streatham United Football Club
● The plans for the coming year
● Q&A

Make an evening of it – Refreshments available from the bar.

Open to members of the FoSC. But its never too late to join. We’d be happy for you to attend. Membership is just £6.00!
Join the friends at http://streathamcommon.org

[Please be aware – being part of the FoSC facebook page does not automatically give you membership].

A single extended license application to cover 3 years July 2019-2022 has been made on behalf of Kisstory by the organisers We Are The Fair Ltd. This is to be heard at the

Anyone is welcome to attend to hear the meeting [other planning applications are also on the agenda], but to make any kind of Oral representation you MUST inform Thomas Dunn either by phoning the licensing planning office or emailing him at  tdunn@lambeth.gov.uk by 14th May. If you do not, you will not be allowed to speak on the evening. All support is welcome.

The organisers of Kisstory, We Are The Fair Ltd had attended a committee meeting with Friends of Streatham Common and spoke on future plans in February. FoSC had an opportunity to directly feedback on issues surrounding previous issues. It was a useful meeting, we very much appreciate them reaching out and whilst we do not have a problem with the organisation themselves who have listened to our concerns, it is problems with the councils overall responsibility to the common which have been identified. FoSC objections include: