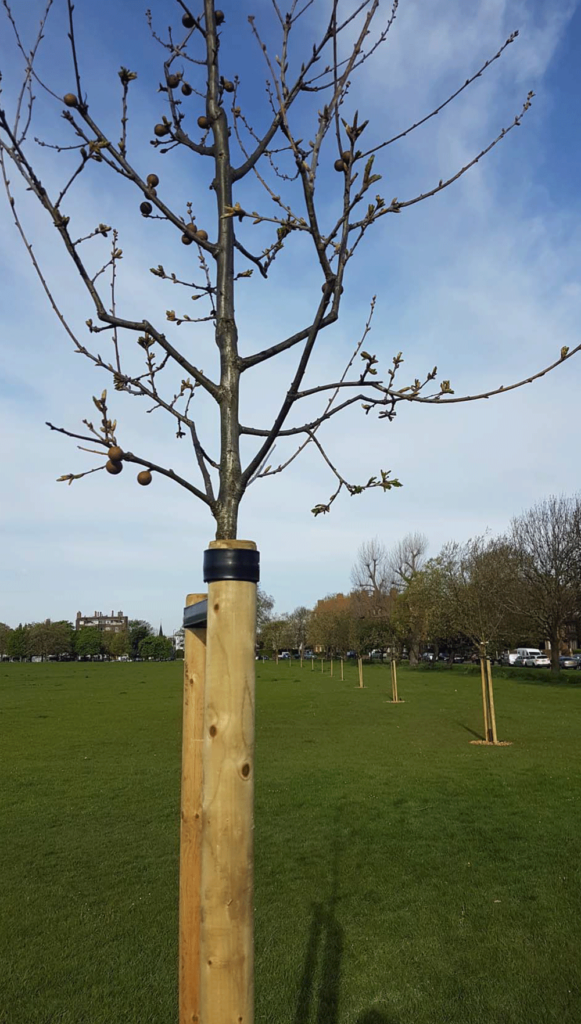 Friends of Streatham Common Volunteer Tom Frankfort has been busy on the community’s behalf, working with the Council’s plan to plant a new line of 16 Oak trees along the North side of the Common, roughly between the bus stop and Hopton Road.

6 of these trees are funded by FoSC. There is the possibility we are to fund more, in collaboration with the Council, in future years.

We are constantly looking at the health and long-term sustainability of the Common and as our resident trees age, we need to think about replacements long in advance to ensure our common stays vibrant and environmentally relevant into the future.

Ecological importance: Within its native range Quercus robur – The English Oak is valued for its importance to insects and other wildlife. Numerous insects live on the leaves, buds, and in the acorns. Q. robur supports the highest biodiversity of insect herbivores of any British plant. The acorns form a valuable food resource for several small mammals and some birds, notably Eurasian jays Garrulus glandarius. Jays were overwhelmingly the primary propagators of oaks before humans began planting them commercially, because of their habit of taking acorns from the umbra of its parent tree and burying them undamaged elsewhere.

In England, the English oak has assumed the status of a national emblem. This has its origins in the oak tree at Boscobel House, where the future King Charles II hid from his Parliamentarian pursuers in 1650 during the English Civil War; the tree has since been known as the Royal Oak. This event was celebrated nationally on 29 May as Oak Apple Day, which is continued to this day in some communities.

‘The Royal Oak’ is the third most popular pub name in Britain (541 in 2007) and has been the name of eight major Royal Navy warships. The naval associations are strengthened by the fact that oak was the main construction material for sailing warships. The Royal Navy was often described as ‘The Wooden Walls of Old England’ (a paraphrase of the Delphic Oracle) and the Navy’s official quick march is “Heart of Oak”. In folklore, the Major Oak is where Robin Hood is purportedly to have taken shelter. Furthermore, the oak is the most common woodland tree in England. An oak tree has been depicted on the reverse of the pound coin (the 1987 and 1992 issues) and a sprig of oak leaves and acorns is the emblem of the National Trust. [source Wikipedia]

To ensure the FoSC are able to keep the common sustainable for now and future generations – join us! A years subscription runs to the same total as a cup of coffee and a cake these days. You will be investing in your community and to the environment, protecting and supporting our local wildlife.